The Founders of the Cobb Institute of Archaeology 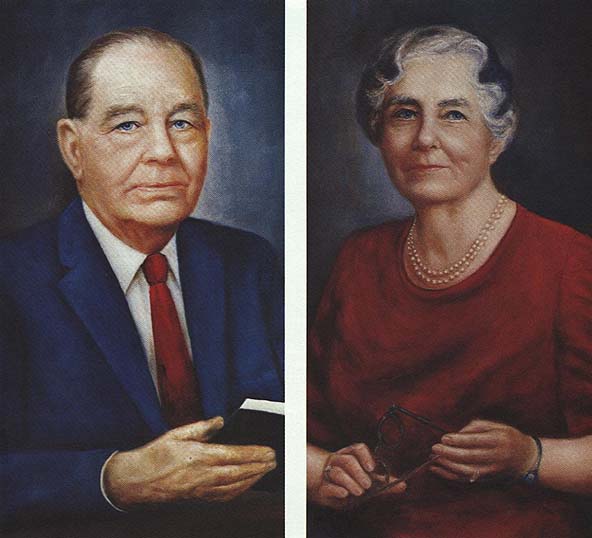 In 1908, Cully A. Cobb of Atlanta, Georgia, received his degree from Mississippi A. & M. College (now Mississippi State University).

He became superintendent of the first agricultural high school established in Mississippi - Buena Vista. After two years in this position, he became head of the Boy's Agriculture Club Division at State, a position he held from 1910 to 1918. He served as assistant director of Agricultural Extension in 1917.

In September of 1918, Mr. Cobb became editor of the Southern Ruralist in Atlanta, Georgia. He was elected president of the American Agricultural Editors Association three terms in succession.

In 1932 the Southern Ruralist was sold to the Progressive Farmer, and Mr. Cobb served as managing editor of the Georgia-Alabama edition of that publication for a short time before going to Washington in 1933 to take charge of the Cotton Division of the newly formed Agricultural Adjustment Administration.

Mr. Cobb moved back to Atlanta in September, 1937. He purchased the majority of stock of the Ruralist Press and was named president. The Ruralist Press was one of the largest printing concerns in the South. He sold the business in 1971.

In 1933, he received the honorary doctor of science degree from Clemson College. In 1959, he was honored with the distinguished service award by the Printing Industry of Atlanta, and, in 1962, he received the distinguished service award from the Printing Industry of America. He was active in civic as well as church affairs for almost 70 years and was a teacher of the Berean Class in the Sunday School of the Druid Hills Baptist Church for more than 30 years. He was a 32nd degree Mason.

Mrs. Cully A. Cobb was born Lois P. Dowdle at Rome, Georgia, August 1, 1889. After attending public schools at Rome, she began her college studies at Shorter College. She continued her education at the University of Georgia where she received her B.S. degree and did graduate work at Cornell University.

Her early work experiences were concerned with various areas of teaching and with service as a county agent. Later she was State Girls' Club agent in charge of the Girls' 4-H club work in the state of Georgia. During World War I, Mrs. Cobb served as director of Food Production and Food Preservation for Georgia as an appointee of Herbert Hoover (then Federal Food Administrator but who later became President). Between 1932-1934, Mrs. Cobb was director of the American Institute of Home Grown Fats and Oils and, as such, was instrumental in persuading Congress to remove restrictive legislation against the manufacture and sale of oleomargarine. She has served as an editor, a writer, a school teacher, administrator, trustee and homemaker. She was a president of the Georgia Home Economics Association. She is the only woman who served as president of the Southern Association of Agricultural Workers (this honor was awarded her in February, 1932).

On August 24, 1934, she married Cully A. Cobb of Atlanta, Georgia. Over the years, Mr. And Mrs. Cobb traveled extensively in Europe and the Near East.

Mr. and Mrs. Cobb have been generous patrons of numerous worthy causes. Mrs. Cobb has been a friend of students, helping dozens of needy students with their formal education. The Cobbs also assisted over a dozen families of young student ministers of Emory University in Atlanta by providing free housing for them in their garage apartment. After Mr. Cobb's death, their home at Decatur, Georgia, was given to Emory University.

Mrs. Cobb served faithfully as a teacher in the T.E.L. Class of Druid Hills Baptist Church for 35 years while still retaining her membership in the Methodist church in Druid Hills.

Together, Mr. and Mrs. Cobb provided the funds for the Cobb Institute of Archaeology in June of 1971. Ground breaking ceremonies at the building site were held on April 14, 1973. On that occasion Mr. and Mrs. Cobb were joined by Dr. William L. Giles, then President of Mississippi State University. Mr. Cobb delivered an address titled "This is the Day" which articulated something of the inspiration that moved him to the founding of an archaeological institute and expressed his special loyalty to and appreciation of Mississippi State University. The Institute building was constructed in 1974 and was completed in 1975. Regrettably Mr. Cobb passed away on May 25 of that year, just before final work on the building and its furnishings was fully completed. The Institute building was formally dedicated in October, 1975.

Through several years that followed Mrs. Cobb made fairly regular visits to Mississippi State University and the Institute. In 1979 her 90th birthday was celebrated by the dedication of a copy of the Lion Panel from the Ishtar Gate in ancient Babylon which was erected on the landing at the entrance to the museum. This formally recognized her special interest and support of the museum's development and activities which was named The Lois Dowdle Cobb Museum of Archaeology in her honor. This was her final trip to Starkville. Mrs. Cobb spent her remaining years in Decatur, Geogia where she died on August 9, 1987 at the age of 98.

Osterholtz Featured on "The Sausage of Science" Podcast